To share your memory on the wall of Michael R. "Satch" Sanders, sign in using one of the following options:

Provide comfort for the family by sending flowers or planting a tree in memory of Michael R. "Satch" Sanders

Satch was always a master in the kitchen, and he could really make your taste buds sing with a little Lawry's and Mrs. Dash. He loved making the perfect drink for each guest, as long as it was an old fashioned or a milkshake - his two specialties. In his retirement, Satch developed a love for fishing (mostly from land) and was excited about improving his fly fishing skills. He also enjoyed treating friends and family at his Day After Christmas Breakfasts, relaxing at Orange Beach each spring with a nose warmer in hand, growing too many vegetables every summer, and watching the birds eat from his feeders. Most of all, though, he delighted in the time he spent with his wife, children, and grandchildren.

He is survived by his wife, Jenny of Fort Wayne; children, Charlie (Jordan) Sanders of Carmel, IN, Molly (Jared) Kurtz of Ossian, IN, Erin (Zach) Hitzfield of Markle, IN, Joel (Liz) Sanders of Ft. Wayne, IN, Leah (Andrew) Johnson of Indianapolis, IN, and Kurt (Mackenzie) Sanders of Ft. Wayne, IN; 17 grandchildren; siblings Marty (Rich) Esoldo, Rita (Clet) Herman, and Doug (Sandy) Sanders.

Mass of Christian Resurrection is 10:30 am, Saturday, January 4, 2020 at St. Charles Borromeo Catholic Church, 4916 Trier Rd, with calling one hour prior. Calling also Friday, January 3, 2020 at Fairhaven Funeral Home and Cremation Services, 6557 N. Clinton St. from 2:00 pm - 4:00 pm and 5:00 pm - 7:00 pm with a Time of Remembrance at 7:00 pm. Memorials may be made to Heartland Hospice or Community Harvest Food Bank. To sign the online guestbook, go to www.fairhavenfortwayne.com
Read Less

To send flowers to the family or plant a tree in memory of Michael R. "Satch" Sanders, please visit our Heartfelt Sympathies Store.

We encourage you to share your most beloved memories of Michael R. "Satch" Sanders here, so that the family and other loved ones can always see it. You can upload cherished photographs, or share your favorite stories, and can even comment on those shared by others.

The Swenson Family, Roberta Tennant, and others have sent flowers to the family of Michael R. "Satch" Sanders.
Show you care by sending flowers

The Swenson Family purchased the The FTD Comfort Planter for the family of Michael R. "Satch" Sanders. Send Flowers

Posted Jan 03, 2020 at 11:21am
This memorial tree is in honor of Satch, and will grow into the future, nurturing the environment for years to come. From the Shellhammer family.

Posted Jan 02, 2020 at 10:40pm
The Sanders family please accept my deepest sympathies during this time of your loss. My heart and prayers are with you.

Posted Jan 02, 2020 at 06:22pm
I don't see my last memory so my apologies if it loads twice. My memory of Mike is that on year 4 or 5 Mike joined my tailgate group. Mike was always up on time to help me to get ready for the day. In addition to our dinner out the night before with Bruce Vincent, Satc h always brought the moonshine of the week to pass. This moonshine was a much anticipated drink of several of our friends. One in particular was our friend Paul Weith who passed a few months before Satch. Those two always shared a drink or 2. They always drove together to the game. I know they are sharing a much deserved drink in heaven. Fellas I will meet you in heaven!

Posted Jan 02, 2020 at 05:16pm
Wishing you peace to bring comfort, courage to face the days ahead and loving memories to forever hold in your hearts. 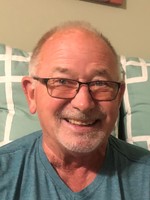 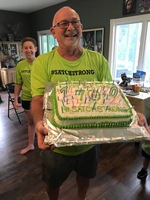 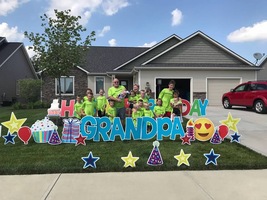