To share your memory on the wall of Wayne Doenges, sign in using one of the following options:

Provide comfort for the family of Wayne Doenges with a meaningful gesture of sympathy.

To send flowers in memory of Wayne A. Doenges, please visit our Heartfelt Sympathies Store.

We encourage you to share your most beloved memories of Wayne here, so that the family and other loved ones can always see it. You can upload cherished photographs, or share your favorite stories, and can even comment on those shared by others.

Allen and Kammie Thorn KB9RSX, Tommy, Karen, and John Koehl and families, and others have sent flowers to the family of Wayne A. Doenges.
Show you care by sending flowers

Posted Aug 09, 2019 at 08:14am
Hello to Wayne's family. I think you might remember me. I was Wayne's next door neighbor in Apartment 5 until 4 years ago when I remarried after the death of my husband Richard Jennings. I have good memories of Wayne. The one that stands out is the day that Richard died. Wayne wasn't aware of the fact since it had just happened 12 minutes prior. Wayne brought over one of his beautiful roses to cheer Richard and me. He will always be remembered for sharing his precious roses with others. From Pat (Jennings) Dobbins
Comment Share
Share via:
AK

Posted Aug 07, 2019 at 03:34pm
Dearest Cousins, We are so sorry for the loss of your beloved Dad. May the memories of his accomplished life give you comfort at this sad time.

Posted Aug 07, 2019 at 08:35am
Wishing you peace to bring comfort, courage to face the days ahead and loving memories to forever hold in your hearts.

The Heindselmans purchased flowers for the family of Wayne Doenges. Send Flowers

The Sturm Family purchased flowers for the family of Wayne Doenges. Send Flowers 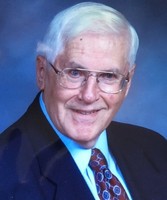