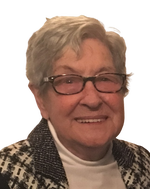 On October 31, 2020, Elizabeth “Liz” Ludwig passed away surrounded in love by her family both near and far. She was 81 years old. Born in the hollers of Dover, Tennessee, she was one of 9 siblings born to Lonnie and Mabel (Ford) Wallace. After meeting at Fort Campbell in Kentucky, Liz married Dale E. Ludwig on August 7, 1958. He proceeded her in death in 1997. They soon moved to Celina, Ohio, where Liz was a homemaker. After several years, they moved to Fort Wayne, Indiana, where they raised their family together as well as built their business – Advanced Products.

Liz is survived by her cherished son Mark (Dagne) Ludwig and adored daughter Melanie “Sis” (Fred) Hoover. She is also survived by her beloved grandchildren – Adam (Derek) Hoover, Tyler (Christina) Ludwig, Megan (Josh) Harber, David (Caitlyn) Ludwig, and Michael (Mikki) Coburn ¬¬– and her even more beloved great-grandchildren – Trey, Deacon, Grayson, Noah, Elijah, Carter, Lewis, and Danica. Liz’s family would also like to express their eternal gratitude to Michelle at Comforting Angels Hospice for the care and friendship she provided to Liz during the last months of her life. They couldn’t imagine going through this time without her support and constant care.

Private family services will be held at a later date. Memorials for Liz can be made to your local ASPCA.