To share your memory on the wall of Edgar Chapman, sign in using one of the following options:

To send flowers to the family or plant a tree in memory of Edgar Vaughn Chapman, please visit our Heartfelt Sympathies Store.

We encourage you to share your most beloved memories of Edgar here, so that the family and other loved ones can always see it. You can upload cherished photographs, or share your favorite stories, and can even comment on those shared by others.

Posted Oct 04, 2019 at 08:16pm
We have so many cherished memories of our dear friend, Chappy. He loved going to Bible study (New Creation) and loved his donuts. His driver drove him down to Muncie for a donut once. He loved his donuts. We took him so many places and built so many fond memories. He got a parking ticket when his Hummer was on the street for too long a period of time. We took him downtown and we informed them that he was in the hospital and couldn't move it; therefore, the charges. He was ready to pay for it and we spoke up on his behalf. A funny time was when his Hummer tire was being fixed at Sears and Edgar and his driver Jack walked down and had an expensive cup of coffee!!! They always laughed about it! There are so many memories, it's hard to single out the most special, because they were all special to us. Love & miss ya, Jack & Barbara Posted Oct 02, 2019 at 03:31pm
My heartfelt condolences to the family of Edgar. He was a gentle giant who always made time for family and friends. May he rest in peace.
Comment Share
Share via: 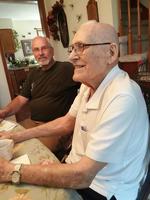